Will Burke
Like many others, I'm here because I love to write, and think my opinions are relavant. Whether you agree or not, I'd like to hear from you, as long as it's respectful. Politeness is optional. By the time you read this, odds are that I'll be a father. I've been married since July 7 2007 (7-7-7: cool, eh? We both got it engraved on the inside of our rings!) We have two cats and a dog. I'm also a bassist who dabbles on guitar, and can fake-it on drums.

The Truth About Red Heads

Have you ever wondered why red-heads tend to wear a lot of greens and browns? I mean, the colors are naturally complimentary, but I've recently learned that it's much more sinister.

As it happens, most natural red heads are half-breeds, cross-bred with Faeries about 3000 years ago to infiltrate humanity. The green and brown clothing is a nostalgic homage to their Celtic roots. The infiltration campaign was spear-headed when the Faery were driven underground by the Druids, who were quite upset when the Faery gold they received in exchange for their carpet cleaning services disappeared, as Faery gold tends to do.

The Druids then scared them into hiding with a giant paper mache hippopotamus. It was several generations before the Faery re-emerged to breed with the inhabitants of isolated communities of farmers and cat herders in Ireland and Wales. After several attempts involving countless keggers and sappy plays, the Faery finally bred enough human/Faery hybrids to send throughout the known world and learn the secrets of paper mache.

For reasons unknown, they have yet to find the right flour-to-water proportions to make their own paper mache hippopotamus. Most of the natural red-heads in the world today are not consciencely aware of the agenda, but they will be. Their Fae allegiance is encoded into their DNA, and will be triggered soon, as the leaders of the campaign are painfully aware that their window of opportunity is closing with the death of print-media, and the subsequent end of easily available newsprint.

If you were wondering how I came across this information, a Fairy (a smaller breed than Faery) got caught in fly paper, and divulged these secrets on the promise that I'd stop making stupid Lucky Charms jokes. The only thing Fairy's (and Faery's) hate more than paper mache hippopotamus's is being mistaken for Leprechauns
Posted by Will Burke at 2:44 PM 7 comments:

Good Lord in Heaven, has it really been more than a week since I've written? Well, I've got a good reason: I'm witless.

I first realized this last Tuesday. I packed-up Callie and took her to my parents for a visit (about a 40 min drive). I always enjoy the drive because my work-commute is 4 Km (about 2 ½ miles, I think) with about 10 stop lights. No shit, it's ridiculous. Plus My wife's car is set-up with the child seat, and she has a CD player (my '94 Cavalier only has cassette – remember cassettes?). So my little girl and are are barreling north, enjoying sunshine and Stevie Ray Vaughn, nothing could go wrong with this plan.

When I got there though, I realized that I had nothing to offer for conversation. “So, what's new?” “Well, we had a two-poop day last week...” It was a little embarrassing, I'm glad it was family. Just to show that I'm still a shit-disturber, I left a diaper under my dad's pillow. It was un-used; I'm not a complete asshole!

Speaking of which, I found a balled-up diaper in the parking lot at work, and I thought, “Really? Did someone really leave a sewage-pack for someone else to pick up?” Ph'kn rude! But just when you think that can't be topped, others have found used condoms in our parking lot. Nothing says 'Romance' like nookie in a retail parking after hours. No wonder Darwinian Natural Selection seems far-fetched when such ignorant bastards still try to breed.
Posted by Will Burke at 9:14 AM 5 comments:

I only looked away for a second.

These are the words that make a parent's stomach drop into their shoes, and turn their blood to ice. One father told of how his daughter slipped down and out of her high-chair, and he came back into the room to find her on the floor. She was fine, but he got a professional opinion at the emergency room, since he didn't see if there had been and head impact. Better believe that I'm using the straps religiously!

So why start with this most cryptic of statements? I found out that she can roll over in my arms, but I was paying attention, and had my other arm under her by the time she got there. She also exercised this new trick in the bath. Not only was I right there to keep her face above water, I could seize the opportunity to clean her neck – the worst lint/sludge trap since my navel!
It was in traffic that my diverted-attention cost me, though not badly. It wasn't worse than the scuffs that black sneakers leave on a gym floor, but it got the adrenaline flowing, none the less! Lord knows I'll be doing double-time on watching traffic from here on in.

But on the child front, a friend recently told Andrea that when a child begins verbalizing, they practice all of the sounds they could possibly need for any language. From there, they're conditioned into the local dialect. Apparently, our child is rehearsing for the event that we should teach her to speak Kettle. Oh yes, she's nailed that delightful pitch that can make dogs divulge their secrets. We're delighted.

I mentioned that it was Andrea's Birthday last week. I tried cooking Beef Wellington and Crab Cakes. Both tasted great, both looked like they had been served with a pitch fork. The crab cakes were too wet, and fell apart. The BW should have been made in individual portions, but I did it roast-size. Between the pastry sticking to the pan, and the slicing of servings, it too fell apart. Chalk it up to the learning curve.
Posted by Will Burke at 8:37 PM 4 comments: 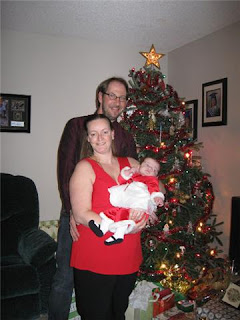 I'm going to guess that most of you don't know what a special day this is; it's the birthday of my darling wife, Andrea. Which birthday? 29, of course. Has been for awhile, and will be for the foreseeable future. The cool thing about this date is that it's also a command: Mar. 4/March Forth! Neat, eh?

We've been together for almost 5 years now, and since then, we haven't stopped making each other laugh, think, and occasionally yell. She is the etiquette to my brashness (though she can out-crass a sailor when the mood takes her), and the action to my “analysis paralysis.”

As I'm sure you've gathered, I hold-up my end of the functional parenting – bathing, diapers, and feeding at all hours, but it's Andrea that brings the style to the family. Not only does she keep Calli in clothes that fit and match, but made sure that she had an appropriate room to start her life in.

She has opened my eyes to different worlds, secular and otherwise, and most importantly, never let me forget this powerful magic: “Whatever you can laugh at can have no power over you.”

Happy Birthday, Andrea! I love you, and hope you have a wonderful day, only slightly less wonderful than all the days to follow.
Posted by Will Burke at 3:25 PM 6 comments: